Look closely in the picture below, taken by Kareem el-Beheiri (Click on it to enlarge). You’ll find a Ghazl el-Mahalla woman striker carrying a sign that reads: “Down with the government! We Want a Free Government!” 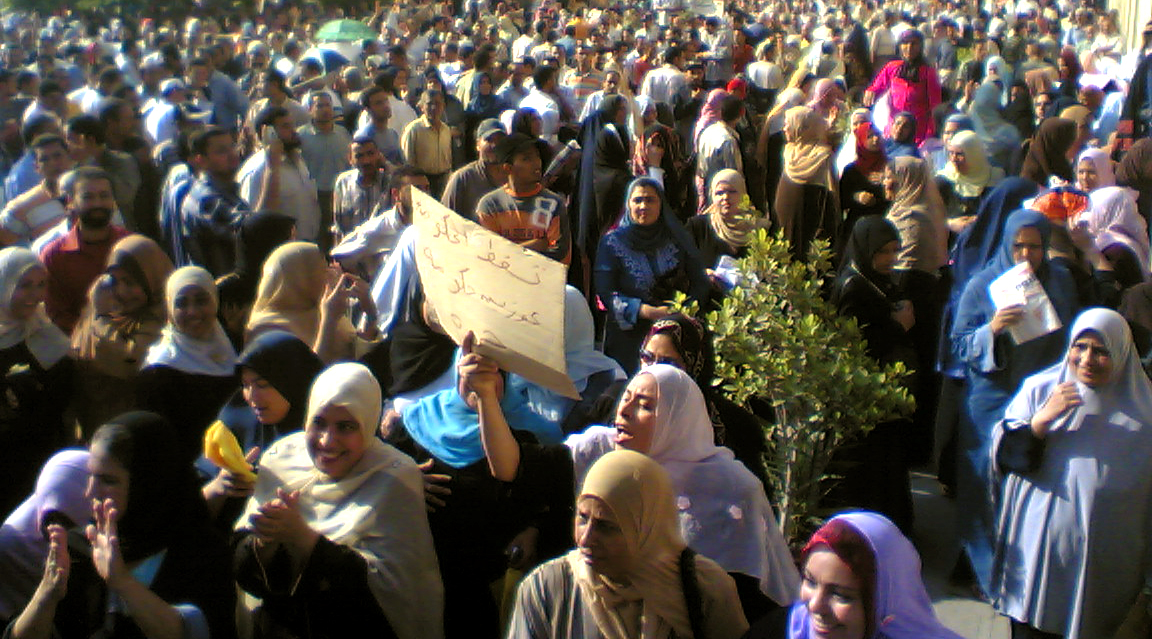 And they tell you these strikes are just “economic”?! Hell no!!

Many on the Egyptian left, including myself, have engaged over the past months in fierce polemics against some, both inside and outside the left, who were scoffing the Winter of Labor Discontent as just a bunch of “hungry workers who are running after peanuts, and not caring about politics.”

My answer is this: “What is ‘politics’ to you?”

1- When workers under a classic Third World dictatorship mobilize for a strike, knowing they don’t have labor unions to protect them, knowing their industrial action is “illegal,” knowing they may be confronting State Security police who may take them away and electrocute their balls and abuse their families, knowing they may be clashing with riot police troops that may kill them. Then their move to strike, even around “economic” demands, bears GREAT “political” connotations.

2- When workers go on strike in a factory, but win “economic” gains that soon to spill over into a generalized struggle both within the sector this industry belongs to and to other sectors in the economy that are not directly related to it… then this is politics!

3- When workers start moving, it will be foolish to expect them to move homogeneously with the same level of militancy and clarity about what to do next. While some workers in Ghazl el-Mahalla last December were too happy to go back to their work after they scored a victory, there was a more militant section of workers in the factory who started pushing for the impeachment of the corrupt, govt-sponsored local unions, threatening to launch an independent alternative national union…THIS IS POLITICS! The fight for independent labor unions has always been in the heart of the political transformation, like those that occurred in the former Stalinist states, South Korean and Latin American dictatorships, among many other examples. The same demand is now being put back again after a retreat since last spring, following the govt crackdown on the labor activists, whether those affiliated with the CTUWS, or other leftist organizations, including witch-hunt and victimization of leading labor figures. This fight is not going to be settled anytime soon. Things take time. But the working class has started its movement.. following the dark days of the 1990s vicious attack by the ruling neo-liberal gangsters around Mubarak and his corrupt family and relatives, that resulted in the decimation of the core of the textile industry. That’s why it’s amazing to see today the strongest resistance against the neo-liberal dictatorship from that same sector. What can I say? Mahalla never ceases to amaze me. They were, have been, are and will always be a source of inspiration.

4- Activist entities started to appear in several places that witnessed strikes. Names like “Kafr el-Dawwar Textile Workers For Change,” “Workers For Change in the Grain Mills,” “7th of December Movement For Change” were never heard of before December 2006. Having been in touch with some of the activists involved in these fronts, I can safely say this is not an “internet phenomenon” but newly mushrooming networks that are trying to link the most militant workers in the several industrial centers. This is Politics!

5- When we get a strong participation of women workers in the strikes, and on occasion they would be taking the lead and adopting more militant positions than their male workers, then this is POLITICS! We are talking about tens of thousands of women in an oppressive society challenging their gender roles as they struggle with, and on occasions lead, their male colleagues… This is politics!

6- It’s extremely easy to jump from the “economic” to the “political” in the case of the public sector workers… As when they start striking over bread and butter issues, they engage directly against “government” appointed managers, “government” appointed union officials, “government” security forces. That always acts as a catalyst for the public sector workers to start generalizing politically about the nature of their economic struggle.

7- As one can see from the picture above of the woman worker raising the banner demanding the govt overthrown, and as one can see from the videos of the workers chanting the World Bank and Colonialism. This means there is slowly an increasing number of workers who have come to the conclusion that the government has to be overthrown and an international order led by financial institutions like the WB and IMF has to be challenged, in order to achieve the set of simple “economic” demands that triggered their action. Comrades, politics is in the heart of what’s happening today in Ghazl el-Mahalla and other factories.

I strongly recommend you read this classic by Rosa Luxembourg, The Mass Strike, which until today stands in my view as the best guide to understanding the politics of labor strikes… The book is also available in Arabic here.