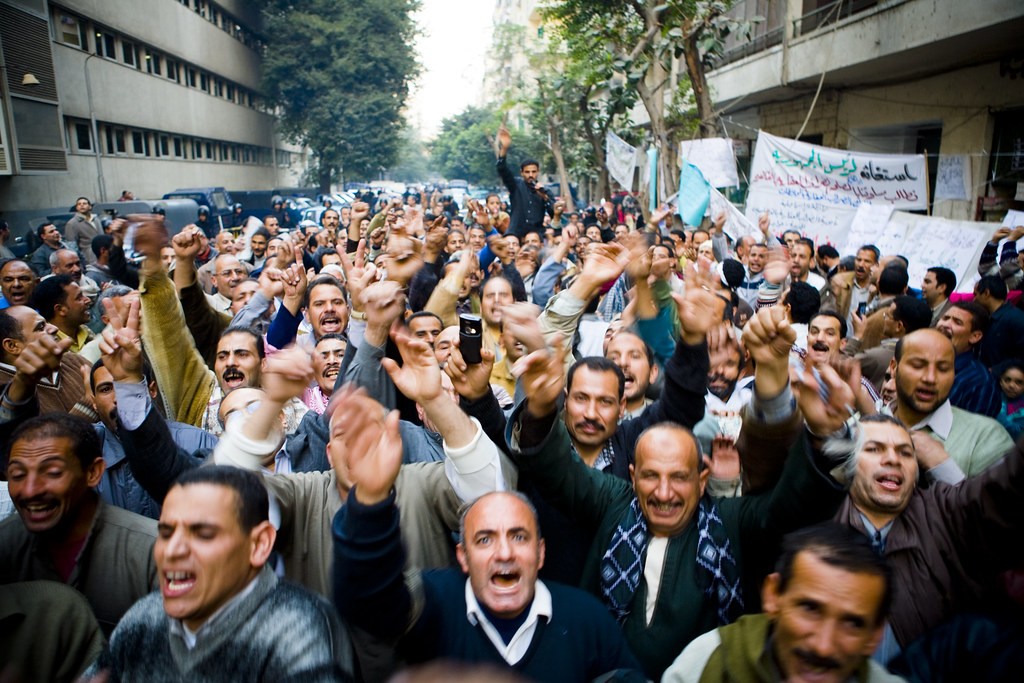 This year may not pass without another earth shaking event that will change the face of class struggle in Egypt.

Though news about the independent trade union, which the Real Estate Tax Collectors are currently working on setting up, had already surfaced as early as February, one month following their victory by which they raised their incomes by 325%, I’ve been cautious in tackling the subject on the blog… coz the trade union is still not established completely.

Some Higher Committee for the Real Estate Tax Collectors’ Strike members’ announcements of their intention to build the new union last February were misinterpreted as a foundation manifesto. But later, two statements appeared in May by the strike committee, signed under “The Independent General Union of the Real Estate Tax Collectors.” This is was more or less seen as the official declaration of the union… yet, there is still so much building to be done on the ground… The good news is, however, the process has already started, and I’m extremely optimistic about how it’s evolving.

The country’s trade union movement was crushed following the 1952 coup by Nasser’s Free Officers. The new “revolutionary” military regime inaugurated its rule by executing two Communist workers in Kafr el-Dawwar, repressed all organizations on the left (and on the right), mass jailed labor activists, and crowned its achievements with the 1957 General Federation of Trade Unions which lives with us till today.

Rather than representing workers and civil servants, the Federation is the regime’s arm when it comes to controlling and mobilizing the working class. Its elections are rigged. Opposition and independent candidates are routinely banned. Those who usually make it are NDP card carrying members, or police-friendly workers.

Though on few occasions some independent or opposition candidates make it in the elections at the Factory Union Committees level, it’s impossible to get anyone who’s slightly anti-regime in the higher level of the General Unions, let alone the 11-member Federation board. The board at the moment is headed by Hussein Megawer, the NDP parliamentary bloc leader. Out of the 11, ten have NDP membership. The 11th is a member of the legal “leftist” Tagammu Party. He’s the head of the General Union of Military Industries… so, ehem, forget that the govt would allow a “communist” to run the military factories. So, yes, he’s pro-govt of course.

Across the wave of strikes flaring since December 2006, the state-sponsored Factory Union Committees officials denounced, conspired, and made their best efforts to sabotage the industrial action. In Kafr el-Dawwar, the strikers “detained” their union officials to force them to stay in the occupation, while in Mahalla the strikers hospitalized the head of the union when he urged them to suspend their strike and go home. The cases for class betrayal are numerous, following a notorious legacy from the day the Federation was founded.

In few cases, where activists manage to make it to the FCUs, they face immediate witch-hunting, and get sacked on fabricated charges.. The few exceptions I came across of FCU members siding with the industrial action were either one of those two:
1-The factory was to be liquidated, and everyone would end up on the street including the FCU members, pushing the latter (or some of its members) to take pro-strike positions
2-In places where there is strong tradition of union militancy – usually among highly skilled workers – that even the police cannot most of the time rig the elections or touch the candidates, like some of the cement companies. There you get FCU members who agitate for and lead strikes.

But things will change.

Though the blue collar workers ignited the fight to build the independent labor unions in January 2007, it’s now the white collar workers (who in cases are even poorer than their blue collar brethren) that are spearheading the fight, represented by the Real Estate Tax Collectors.

The state-sponsored General Union for Bank and Insurance workers has only 11 union committees in the 29 provinces (during the strike last year the number of provinces was 26 still, prior to Mubarak’s administrative decrees), mostly in Giza and the Nile Delta provinces. The strike drew only the support of members of Daqahliya’s union committee and half of those in Giza’s. All the rest (i.e., 9.5 out of 11) sided with the state and worked hard to sabotage the struggle.

The state-sponsored union officials, however, were smashed!

The strike committee, having led successfully and democratically the three month strike and ten day street occupation, declared it was not disbanding itself in January, and would continue to exist to ensure the agreement with the Ministry of Finance was fully implemented.

The committee was composed of a representative for each province, and some provinces were given more than one seat, like Giza, from where a good number of the leading activists in the strike as well the participants in the occupation came… The committee mushroomed at times to include roughly 33 representatives. However, the core members of the committee who met regularly and were in effect the leaders on the ground were around 11, mostly from Giza, Daqahliya, Qalyoubiya and other Nile Delta provinces.

The victory gave courage to the strike leadership to pursue a line, which few years ago would have been a dream if not hallucinations: overthrowing their state-backed union officials and establishing an independent union, away from the cloak (or gallabiya?!) of the Federation. In other words, establishing the first independent trade union in the country since 1957, half a century ago.

If this union is built on the ground and stood challenging the Federation, it is expected (take my word for it) there will be a strong left-leaning leadership for this union, which already has built its base of support, not by rhetoric but, by demonstrating magnificent skills in organization during the strike, a non-compromising fighting spirit in negotiations with the Minister, and a dynamic mobilization of their colleagues.

This should have a ripple effect in the Egyptian political arena, that only fools can ignore. The establishment of independent union federations have been in the heart of the political transformation process in former dictatorships like Poland, South Korea, South Africa and others. Once the workers start organizing collectively in a structure that can voice their plight, frustrations, exploitation and oppression, and channel these into a striking force… then nothing can stand in the face of the labor movement. it’s like awakening a giant, except here in the Egyptian context, the giant has already woken up and is fighting, yet still not in full armor and is searching for weapons. The free union will be one of those weapons (it’s not the only tool and not an end in itself).

Cracks will start to appear in the Federation’s body if the Real Estate Tax Collectors manage to launch their free union. This will encourage their colleagues in other branches of the civil service to follow suit.. Also this can give a morale boost and logistical support for the industrial workers, who are pursuing similar projects in other areas. A new independent federation of trade unions could rise from such marriage, as long as it comes from below.. not by parachuting from above like some opportunists are trying to do.

At the start of this summer, the Higher Committee for the Real Estate Tax Collectors’ Strike, began circulating a call for the independent labor union, collecting signatures from the civil servants. The results are promising: 15,000 have already signed the call, out of 55,000 tax collectors, mainly from Giza and the Nile Delta. Things were moving much slower in Upper Egypt, Alexandria, Sinai and the Suez Canal cities. But, as I said above, I’m VERY optimistic about how this is proceeding. Things have started to move in these provinces and now everyday there are new signatories joining the call, or requesting meetings with the Higher Strike Committee members to endorse the project.

Already the government is panicking. Hussein Megawer in person contacted Kamal Abu Eita this month, and promised to impeach the state-backed union officials, offering him the position of the head of the General Union of Bank and Insurance Workers within the Federation, in exchange for giving up the free union project. Kamal, bravely, refused.

The strike leaders are hopeful they can get at least 30,000 signatures, endorsing the free union project. With such numbers, a call will be made for a “general assembly” that will elect the union leadership.

The challenges lying ahead include:
1-Will the signatures-collecting campaign reach the target the strike leaders are hopeful of, before the end of the year?
2-When the call for a general assembly takes place: What will be the balance of forces? Will the pressures from below be strong enough to force the state to retreat and provide space for the tax collectors?

The answers to these questions depend on subjective factors. Primarily it is the fight of the tax collectors themselves.. and how successful they will be in the coming few months in their efforts to liaise and network with their brothers and sisters from the provinces in the south and continue the campaign in the north (which is already in full speed).

But there is so much activists like yourselves could do in order to help the tax collectors, especially when it comes to the 2nd challenge mentioned above.

1-Spread the word: The more there is awareness among the people in the country and abroad with what’s going on, the better. The govt can repress whoever, and eradicate whatever challenge as long as this is done quietly and without attention from the public and the outside world. The news of the tax collectors have to trickle more to the mainstream press locally and internationally. This will make it more difficult for the state to crackdown on them, and if it does let’s make it very costly. So please circulate information about the struggle to your network of contacts.

2-Trade unions representing the civil servants in Europe, the US or elsewhere can give a morale boost to their Egyptian colleagues if they start opening channels of communications. If you are a trade unionist in a civil servants union, email me.