Mubarak’s former ambassador to the US, was interviewed by the Cairo Review of Global Affairs.

CAIRO REVIEW: We didn’t see anti-American or anti-Israel messages in Tahrir.
NABIL FAHMY: It’s an interesting point that in all of my discussions with everybody here, foreign policy was not mentioned once by the demonstrators, not once. They didn’t argue about it, they didn’t reject it, they didn’t send any messages to anybody. When the army took charge, the army said that they would respect international agreements, just to calm people’s nerves. After the demonstrations ended, the demonstrators said that they were changing Egypt domestically and that they would respect international agreements and discuss these later. So this was not about foreign policy. What’s important now, frankly, is to build a better Egypt. We will need some time.

CAIRO REVIEW: How will the revolution affect Israel and the Egyptian–Israeli peace treaty?
NABIL FAHMY: This revolution actually serves Israel as well. It may not serve the Israeli right. It definitely will not serve those who do not want peace between Israel and the Arab world, those who do not want a two-state solution. They will hear our voice much louder when they hear the Arab voice. It will be much louder when they enter east Jerusalem and try to place Jewish settlers in that part of town. Therefore, the Israeli public will realize how wrong these steps are from the Israeli right and how this will lead to postponing peace. Yes, it may worry people initially, but I think it will energize the peace movements on both sides, give a strong message to the right that if you go too far, your own people will push you out, not us.

Again, I don’t know on what basis the Review and other US media darlings like Mona el-Tahawi reiterate such claims that Tahrir was solely “domestic” and did not witness any “anti-American or anti-Israel messages.” The square during the 18-day uprising was rocked with chants labeling Mubarak and Omar Suleiman as agents of the US and Israel. Feel free to browse some of the pix in the following slide show. And I hope the DC based pundits who describe themselves as “Egypt experts” while they don’t know a word of Arabic to hire a translator to tell their sorry ignorant asses what do the signs say. 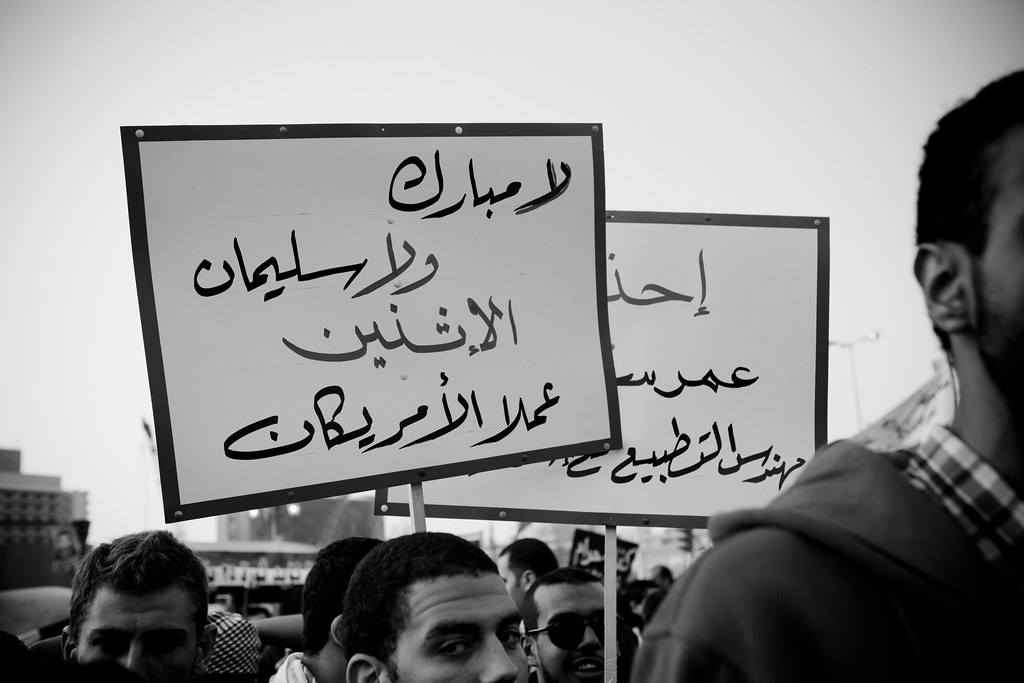 The roots of the January 2011 uprising could be traced back all the way to the mass protests in solidarity with the 2000 Palestinian intifada and 2003 mobilizations against the war on Iraq. Egyptians have been impoverished by neoliberalism, the same neoliberalism Essam Sharaf’s cabinet wants to keep in place with cosmetic changes. And the same IMF and “economists” who screwed our economy with their neoliberal recommendations from 1992 onwards, are coming out again today to congratulate us, promising us a bright future, as long we stick to their policies, again!

But all throughout the economic hardship, Mubarak’s clientalism to Israel and the US was an additional explosive factor. Not only was Mubarak’s foreign policy hated and despised by the Egyptian people, but parallels were always drawn between the situation of the Egyptian people and their Palestinian brothers and sisters. The latter have been the major source of inspiration, not Gene Sharp, whose name I first heard in my life only in February after we toppled Mubarak already and whom the clueless NYT gives credit for our uprising. And even the leaders of social protests who were fighting for workers’ rights were among some of most staunch Palestine supporters.

It’s no wonder that the Zionists have been freaking out since the uprising started against Mubarak. The Egyptian people hate apartheid, and if we get a government that truly represents the wishes of the people, then Camp David will be scrapped and the natural gas supplies to Israel will stop. And no, it’s not enough to renegotiate the prices of the gas exports. All diplomatic and economic relations with the Israeli state should stop immediately.

Essam Sharaf’s cabinet which includes former Mubarak’s elements, and is controlled by the Supreme Military Council (read: Mubarak’s former generals), will not answer the aspirations of the Egyptian people in ridding their country from any ties to Zionism. And shame on Nabil Fahmy for uttering: “This revolution actually serves Israel as well.” It doesn’t Mr. Fahmy. And as we proceed to phase II of the revolution, we are aware Egypt will never be liberated if it remains surrounded by an ocean of US-sponsored Arab dictatorships and a Zionist regime.