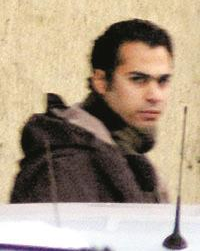 UPDATE: Torture in Egypt blog has designed a banner, with Islam’s face, calling for prosecution of torturers.