Fellow bloggers alerted me to some former SS officers now job hunting online, and bragging about their “experience” in detailed CVs!

Let’s start by Hazem Ramzy, a “certified sniper” and former guard of the Israeli ambassador in Cairo, who seems to be living some 007 dream. On his LinkedIn page he writes:

Hazem Ramzy’s Summary
Summery:
Through the years of my education in Police Academy and my work in different areas in the ministry of interior in Egypt, I have worked in many projects and gained a tremendous experience in the Security fields, such as Private International Law (Conflict of Laws), Civil Law, Commercial Law, Islamic Jurisprudence, Air Maritime Law, Execution & Criminal Procedures, and Law in Foreign Language, Agriculture Law, and Administrative Law.
First Aid and Forensics, Information and Public Relations, Applications in Criminal Investigations, Security Management, Security Demography, Security Crisis Management, Police Operations Management.
Now I’m Seeking a managerial position in the safety and security industry in which my experience and qualifications will be best used, in which to add value for me and for the company i’m working for.

Goals:
To join a well established leading National or Multinational company inside or outside Egypt in a position that matches my qualifications and experience.
I am seeking a stable working environment which will allow me to leverage my experience through extensive market and product interactions and training, and introduce a clear career path to me where I can grow with my company and achieve its and my own goals.

Hazem Ramzy’s Experience
Police Officer
Giza Security Bureau (Securing Israeli Embassy)
Security and Investigations industry
July 2009 – July 2010 (1 year 1 month)
• Securing the Israeli Embassy in Egypt, along with protecting and securing the Ambassador and people working.
• Conducting patrol duties on foot and by car around the Embassy.
• Keeping the peace around the embassy, social events, processions, strikes.
• Conducting initial investigations, gathering evidence, taking statements, and complying with relevant legal requirements.
• Interviewing suspects, witnesses in accordance with relevant legislation in any strikes or violence incidents.
• Escorting the Ambassador or other important visitors and political figures out of the premises.
• Searching vehicles as they enter and leave the embassy and other premises.
• Patrolling around the embassy or building around it to check security and investigating any problems that may accrues such as (break entry, assassinations, fire, robbery, and evacuation in the emergencies).
• Checking people who leave and enter premises.
• Searching individuals, personal property, vehicles, premises and land.
• Conducting arrests with due regard for the human rights, security and health and safety of detained individuals, members of the public, colleagues and self.
• Gathering, recording and analyzing intelligence to achieve safety and riots reduction objectives.
• Preparing daily reports on the daily activities.
• Working as a competent team member, including wider cooperation with other specialist departments.
SSIS Agent
State Security Investigation System (SSIS)
Security and Investigations industry
November 2001 – August 2009 (7 years 10 months)
Work against extremist religious elements and groups of all kinds.
• Evaluating and monitoring the police officers performance in all directorates.
• Monitoring the officer’s abuses as regulators and presenting reports on cases of law violations.
• Working closely with United Nations High Commissioner to follow up on foreigners and their affairs in Cairo.
Hazem Ramzy’s Education
Police Academy
Good, B.Sc. in Police Sciences, LL.B degree of Bachelor of Law
1995 – 1999

Oh, and Mr. Ramzy is also on Facebook, feel free to send him friend request or if you have a job for him contact him right away… 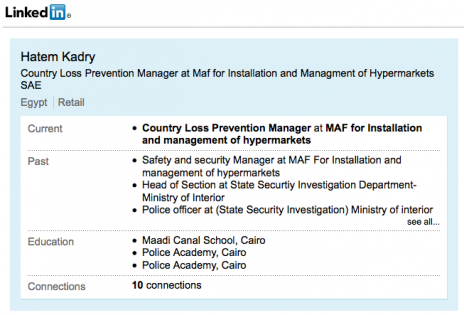 There is also Hatem Kadry, who doesn’t post his picture, but shares his CV with us:

Hatem Kadry’s Experience
Country Loss Prevention Manager
MAF for Installation and management of hypermarkets
Retail industry
January 2009 – Present (2 years 3 months)
My duties include the following activities:
Planning and implementing the security and safety plan for all Carrefour Egypt operation
Conducting threat assessments to provide the view of the operating environment in the country
Conducting Monthly audit on all Hypermarkets, Express stores to evaluate the operation in the stores
Ensure that the security policy and procedures are being followed and implemented
Coordinating with the concerned police departments, State Security Investigations Service, different ministries, on arising security issues.
Responsible for statistical reports, case logs, surveillance and internal investigation, Preparing the contingency plan and SOPs for all Egypt.
Works with the country head, Vice President Security and safety and executive leaders within the company (Egypt-Dubai) to determine strategy for preventing incidents and continued improvement in safety and health programs and performance, evaluating and Facing risks.
Achievements
Participated in the opening of El Obour store – Egypt 2008
Participated in the opening of the first Carrefour store in Syria-Aleppo (2009)
Responsible for Opening of Maadi Carrefour express (Cairo)
Controlling the crises of Birds flu, Swine flu with the coordination of Ministry of health, Ministry of agriculture, Ministry of interior( state security and Dubai(HQ)
Coordinating and assisting in securing the visit of the president of ARE (Egypt) Sep 2009 to Maadi store
Responsible for Opening of Sharm Carrefour express

Security Officer Assistant
Ministry of Interior
Government Agency; 1001-5000 employees; Government Administration industry
November 1992 – November 1993 (1 year 1 month)
My duties included the following activities:
Participated in planning and implementing the security plans
Securing the strategic facilities of the Central Security Forces
Training of staff on the security procedures and implementation of plans
Pre-Investigation activities
Compiling the services schedules and plans
Participated in the preparation of the staff payroll

“In charge of NGOs activities” meaning he was part of the SS section in charge of monitoring, arresting and interrogating human rights and civil society activists. And do I need to explain what a “Member of presidential and parliamentary elections work groups” used to do? 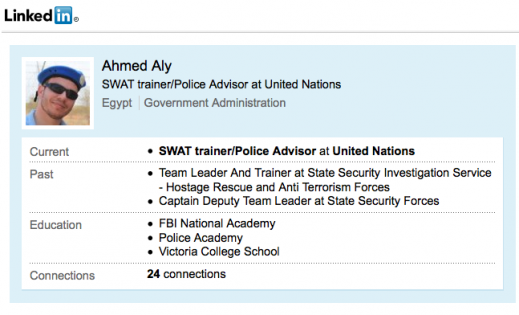 Another ex-SS man with FBI training, Ahmad Aly, posts his CV looking for a job:

Ahmad Aly’s Summary
Worked in different fields since i graduated in 2001 , starting from state security forces [1 year ] , then in the Hostage Rescue and Anti Terrorism Forces [8 years] .
Within this time period i graduated the FBINA basic diploma for 3 months in Quantico Virginia USA Session 231.
And now i am a Swat Trainer / Police Advisor in the United nations Mission in Sudan. 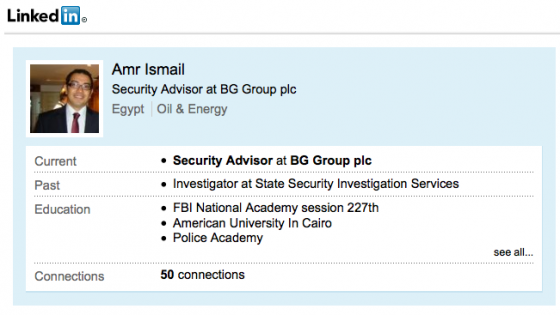 And this former SS investigator, Amr Ismail, brags about his FBI training: